IGA Quoted in WSJ, MLPs as a Hedge and Energy’s Emerging Bull Market

IGA Quoted in WSJ, MLPs as a Hedge and Energy’s Emerging Bull Market

Investors enter 2018 with mature US equity and bond markets wobbly and midstream energy MLPs advancing in an emerging energy bull market. MLPs offer defensive high yields, improving fundamentals and attractive hedging characteristics. With the Federal Reserve withdrawing its unprecedented accommodation and foreign adversaries, like North Korea, challenging the Trump administration, MLPs’ attributes provide a prudent antidote to an increasingly risky and volatile market environment. In this month’s letter we examine the market and case for MLPs.

With Bitcoin speculation and stock market records routinely grabbing headlines, the US equity markets feel like the Internet bubble of 1998-2002. Our November performance comparison of the S&P 500, Nasdaq, MLP indices show an intriguing negative correlation of MLPs to the major markets during that historic boom. As making money feels easy again, like 1999, and man’s herd instincts are recreating a similar market environment, MLPs’ 7.64% yield 1 and enticing distribution growth profile offer a logical diversification alternative.

MLP performance is driven by mutual fund flows which had record outflows in November amid reports of distribution cuts and leveraged fund liquidation. Forced liquidations are often clear indicators of market bottoms. November’s outflows were driven by a combination of tax loss selling and new tax law fears. These factors were detailed in last month’s letter and we believe the newly signed tax law’s benefits will drive positive fund flows into February. The Wall Street Journal cited our analysis of a 5-12% tax benefit to MLP funds last week in Jason Zweig’s estimable “The Intelligent Investor” column. This tax arbitrage combined with improving oil prices and MLP fundamentals support our bullish view. Since MLP mutual funds, ETFs and CEFs have been plagued with tax inefficiency, the enactment of the Tax Cut and Jobs Act of 2017 should attract new capital inflows which will reinforce these positive fundamentals. 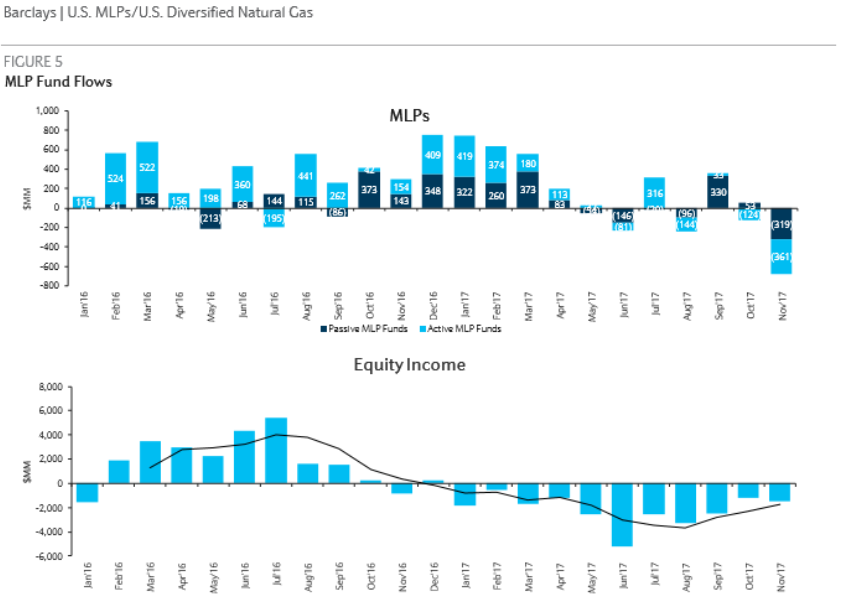 “Funds flow has been a big deal in constraining the external funding model utilized by the MLP sector. Retail has soured on the sector and appears very reluctant to migrate back into the space. We suspect continued simplification efforts, which result in distribution cuts, will keep retail investors on the sidelines until the headline risk wears off and until the path of distributions in passive products like the AMJ ETN (investors have experienced distribution cuts in 8 of the last 12 quarters with declines of 9.5% and 8.0% in 2016 and 2017 respectively) begins to rise,” wrote Barclays earlier this month4.

With distribution cuts by Plains All American Pipeline, LP (PAA) and Genesis Energy, LP (GEL) in the second half of 2017, and a halving of its distribution growth rate by industry leader Enterprise Products Partners, LP (EPD), the sector appears to have passed the tipping point in the distribution growth downturn. Further, with higher oil prices, operating momentum should also reverse in 2018. All these factors add to our bullish MLP bull scenario.

The chart of the crude oil (WTI) below shows the commodity price turning up. Higher oil prices will help the oil production which will help MLP prices by increasing their transportation, processing and storage revenues. 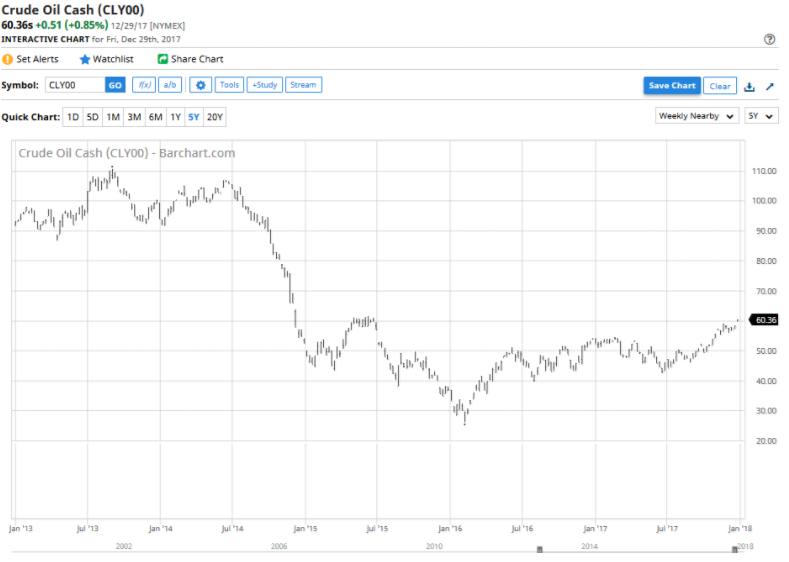 The five-year chart below shows the Alerian (AMJ) ETN breaking above its down trend line.

The one-year chart below of the AMJ shows the MLP index breaking above its shorter term downtrend line.

2017 was a surprisingly difficult year for energy stocks and MLPs. Despite the Trump administration pro energy and “America first” economic policies, MLPs experienced negative returns. Energy companies continued corporate restructuring to adjust to the 2014-16 decline in oil prices and the “new world order” of global energy production. With the US fracking boom, the US energy industry enters 2018 as a top oil producer along with Russia and Saudi Arabia and world leader in natural gas production.

In 2017, IGA’s MLP returns underperformed the AMZX 7.58%, but outperformed over the last three, five, ten-year periods and since inception. IGA’s returns have outperformed the AMZX by 4.16% in 2011, 19.75% in 2012, 10.29% in 2014 and 17.46% in 2016. 2017’s underperformed was due to our overweighted American Midstream Pipeline (AMID) position which helped in 2016 but hurt in 2017. In February 2017, JP Energy (JPEP) and AMID merged. We maintained position in AMID to reduce capital gains and to allow this ArcLight Capital Management supported firm to integrate its varied acquisitions. ArcLight is a $17 billion energy PE firm with significant stakes in both JPEP and AMID. Following our December meeting with AMID’s management, at the Wells Fargo MLP conference, we remain confident in AMID’s turnaround and restructuring prospects as we do with Calumet Specialty Products Partners, LP (CLMT) and Crestwood Equity Partners LP (CEQP).

While competition from alternative fuels is a valid concern for oil growth, we see this threat as muted until the mid-2020s. Demand for petroleum distillates is inelastic. “We are still going to see oil-demand growth, at least for another decade, probably a 10% to 20% increase in the next 20 years. Currently, the world uses about 96 million barrels of crude per day. Demand is inelastic, and it’s hard to see renewables eating much into that in the medium term,” according Raymond James’ energy analyst Brian Youngberg 5.

“The stock market will fluctuate” JP Morgan reportedly predicted. And in 2018, it will fluctuate more. The chart below from Advisor Perspectives shows the correlation between margin debt and the S&P 500. It shows that record margin debt often signals market tops and that condition is present today. However, the margin can drive the market both up and down. It seems equally likely that the market could be either up 20% or down 20% in 2018. In either case a thoughtful review of your portfolio risk is important. 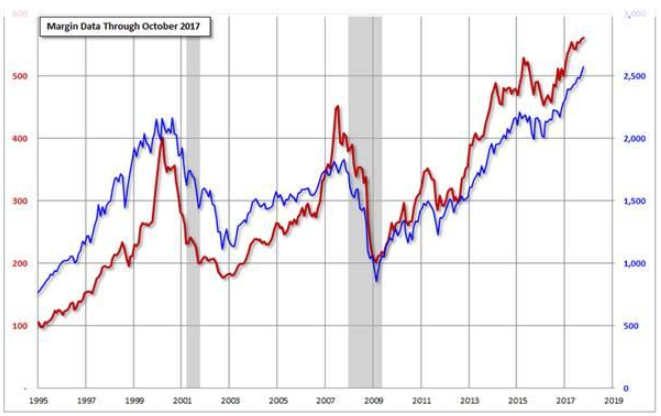 One area we have identified where we provide measurable financial benefit is for individuals with concentrated stock positions. By using Interactive Brokers low margin rates and dynamic portfolio hedging, we can offer tailored hedging strategies which avoid capital gains, lower portfolio risk and increase income. Corporate executives with company stock often have concentrated stock positions. Many of those who did not properly prepare in the tech bubble were some of that bear market’s biggest losers.

We welcome any questions you may have and wish you the best in 2018.