Inflation is wrecking the financial boom which commenced in 1981. Both stocks and bonds have been consistent winners since the 10-year US Treasury yielded 15.6% in October of 1981. This secular decline in interest rates has ended. Today’s accelerating inflation won’t reverse soon, nor will it return to the sub 2% levels targeted by the Federal Reserve in recent years.

Today’s high inflation is worsening due to the Russian invasion of Ukraine. This tragic war will create more shortages and supply chain problems which will further exacerbate inflation globally. This war is adding to the recent record inflation measures such as PCE, CPI, and PPI. In their latest respective reports, the PCE rose 6.4%, the fastest since 1982; the CPI rose 7.9% and the PPI rose 10%, also 40 year high rates.

Higher inflation will hurt overvalued stock and bond markets and undermine the popular 60/40 stock-bond portfolio strategy. Interest rates will remain elevated for the next several years leading to poor or negative returns for stock and bond markets and shift investment allocation decisions away from the widely embraced 60/40 stock-bond strategy – the keystone of modern financial planning.

The Federal Reserve’s narrative is not living up to economic scrutiny, Larry Summers recently argued. The Fed is hoping rates will quickly drop back below 2%, but most economists don’t see inflation dropping below 2% for five years.

The Taylor Rule argues that the Federal Reserve must raise rates above the inflation rate in order to curb inflation and, given current inflation levels and pressures, this is a very problematic predicament. We fear inflation data could reach into the low teens and put significant pressure on both short and long-term interest rates.

To tame inflation, the Fed will need a 4-5% Fed Funds rate, and that estimate is probably too conservative. Raising the Fed Fund rate to the mid-single digit level could present a series of problems for the Federal Reserve. The Fed could trigger a recession or raise the government debt service cost significantly. Both of these risks could hurt the economy and the capital markets. On the other hand, the Fed could engineer a soft landing where neither spiraling debt service costs nor an economic downturn ensue, and the power of capitalism and innovation-driven productivity increases could reduce inflation as experienced in recent decades.

The chart below shows the 10-year Treasury yield reverting to its pre-pandemic 3% level. The pandemic and its subsequent waves provided significant downward pressures on interest rates. These downward pressures were compounded by the Federal Reserve’s aggressive levels of accommodation, both through asset purchases on the long-end and artificially low rates on the short-end. With the Russian invasion of Ukraine, markets are grappling with new inflationary influences of the world on a war footing and the Federal Reserve reversing its accommodation on both the short and long ends of the yield curve.

Risk to the Equity Markets:

Because the fixed income markets are the primary liquid alternative to equity markets, the prospect of meaningfully higher interest rates creates competition for equities. Consequently, the risk of higher interest rates due to monetary policy reversal and rising inflation can cause fund flows to reverse away from equity markets for the next several years. Further, since equity valuations are at historically high levels, the potential equity downside risk over the coming years is meaningful.

The Buffett Indicator or Buffett’s so called favorite indicator measures the value of the US stock market to the US GDP. By this measure, the stock market is 100% overvalued and should decline 50% to return to normal valuations. 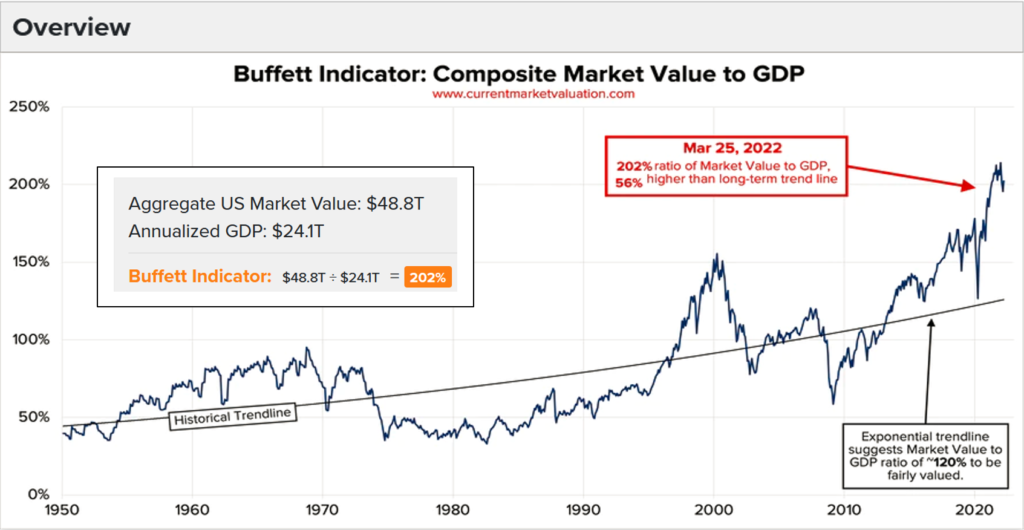 The Shiller CAPE ratio provides a ten-year average price-earnings or “pe” ratio for the S&P 500. The ten-year average smooths out economic cycles. Below is a long-term chart of the CAPE ratio and 10-year Treasury yields. Today’s CAPE ratio exceeds the 1929 peak but is below the 2000 Technology Bubble top. Our concern is that as interest rates normalize, the CAPE ratio will decline and revert to the mean. Further, rising inflation will hurt profit margins and dampen consumer confidence. 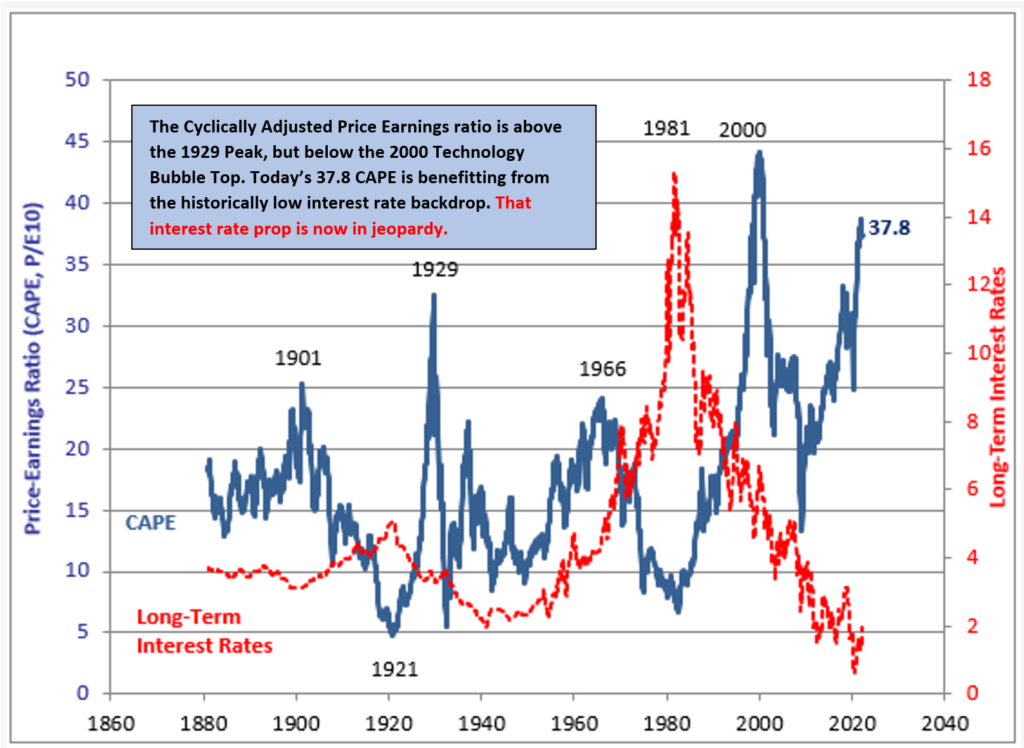 Over the last year, breadth has grown thinner as fewer and fewer stocks maintained their uptrends. This shrinking breadth behavior is typical of market tops as momentum is a key market driver. In the first quarter, all the major indices posted negative returns. The S&P 500, the NASDAQ 100, and the Russell 2000 broke their uptrends which commenced off their March 2020 lows. This year, these indices rebounded off their mid-March lows, with growing hopes for a resolution to the Ukraine conflict and not a devolution into World War III.

The two-year chart below shows all these three indices rolling over with tops in both the Russell 2000 and the NASDAQ 100 in November 2021 and the S&P 500 peaking in January 2022.

“Asset allocation is the most important determinant of long-term investment results,” according to Michael Trotsky, Executive Director of the Massachusetts Pension Reserves Investment Management Board. That view is widely shared in the investment industry. However, we believe that the 60/40 asset allocation strategy must now be adjusted to address the monetary policy reversal and inflation impact expected over the next several years.

BlackRock’s 60/40 ETF declined 4.77% for the quarter. Since the secular outperformance of the popular lower risk 60/40 investment strategy has now reversed, the 60/40 portfolio strategy should underperform and disappoint because both equities and bonds should experience poor performance in the years ahead. Passive asset allocation will shift until both equities and bonds revert to their historical mean valuations. 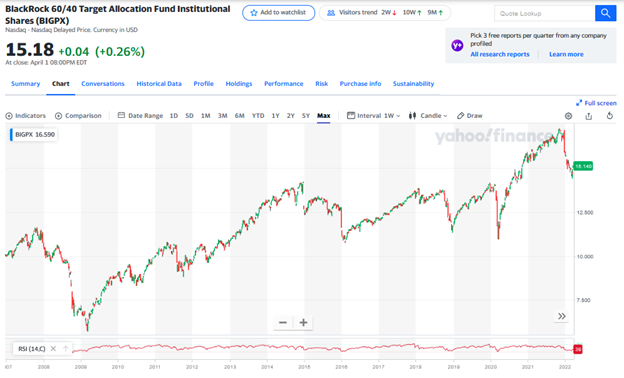 The Problem with Rebalancing:

Bonds, which have been in a forty-year bull market, can no longer serve as a hedge and rebalancing alternative to equities. Today, when rates rise and stocks decline, bonds will no longer be sold profitably to allocate into equities as they have synergistically for 40 years.

Below is a chart showing the long-term decline in interest rates and the strikingly negative -5% decline in bonds during the first quarter. 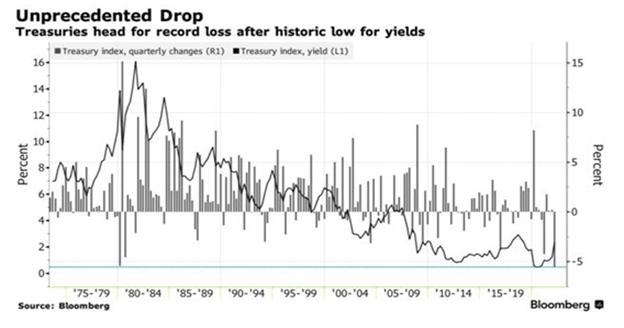 As the keystone of many passive asset allocation strategies, we believe this inflationary cycle will not end until this ETF and similar 60/40 strategies see fund outflows and a loss of popularity.

The economy has entered an inflation cycle. This cycle is characterized by rising inflation, financial asset under-performance, and commodity out-performance.

This cycle is neatly delineated by the ratio of the S&P 500 to the CRB index. In the chart below, we see the inflationary cycle shown by uptrends in the ratio from 1999 to 2008 and from 2000 through today. During deflationary cycles such as from 2009 to 2020 and from 1982 to 1999, the S&P appreciated significantly faster than commodities. Today, that ratio has now reversed as we have entered an inflationary cycle.

We analyzed the performance of the energy ETF (XLE) and compared it with the NASDAQ 100 ETF (QQQ) during these cycles. We used the XLE as a proxy for inflation and the QQQ as a proxy for deflation since technology companies, heavily weighted in the NASDAQ 100, contribute meaningfully to efficiency and worker productivity increases. The chart below shows the performance of each ETF during each cycle. The results are stunning. 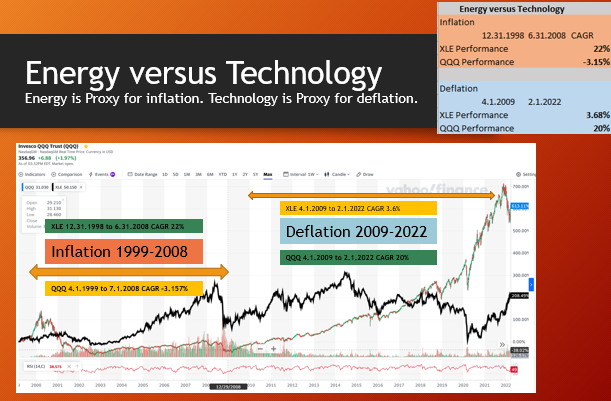 While we are concerned about downside risk in both equities and bonds, employing a rotational strategy, will lead to meaningful loss mitigation if not solid performance. This rotational approach shifts equity ownership toward commodity cyclicals and inflation beneficiaries while decreasing exposure to long duration assets. While a 50% correction in the S&P 500 could occur over the next three or more years, by employing an adroit rotation strategy to inflation beneficiaries can lead investors to significant portfolio out-performance.

We welcome your thoughts and comments