Midstream Master Limited Partnerships (MLPs) are being unduly punished by the decline in oil prices and other energy securities. Midstream MLPs derive their income from fee based and toll road business models whose operations and cash flows are driven by the volumes transported, stored, and processed, and not by the commodity itself. Companies which own the commodity, like upstream (exploration and production), as well as suppliers, and integrated oil companies are far more sensitive to the price of oil than midstream operators. Since June 2014 West Texas Intermediate oil’s price has declined 56.1%, the SIG Oil Exploration and Production Index is off 56.1%, and MLPs (AMZX), from their August 2014 high, are off 34.25%.

Midstream MLPs are being thrown out with the bath water. Demand for gasoline and natural gas are economically insensitive. Demand for gas to drive your kids to school or heat your home is steady. We think buying MLPs now is like buying Apple Inc. during the financial crisis of 2008. In 2008, people did not stop buying Apple products. The market declined and dragged all stocks down. Those people who fretted over a 50% decline in Apple stock, allowed their emotions to guide their decisions, and ignored the solid business fundamentals, may have missed a great buy or sold due to the pressure.

Commodity prices correct themselves. That is an economic certainty. Low prices lead to lower production which shifts the supply demand balance resulting in higher prices. The timing; however, can be uncertain. We believe oil prices are in the process of bottoming and the MLP rout may be over. We recommend buying good quality high yielding MLPs while they are at discounted prices. In a year or two those MLPs should produce double digit returns and provide a stable growing tax advantaged income stream for your retirement. The Apple analogy will be a sweet reminder.

“While shares of oil and gas companies have plummeted as energy prices spiraled downward, firms that specialize in distribution are poised to rebound as investors figure out their business model depends more on the volume of oil sales than the cost. So-called “midstream” energy companies, which typically use a fee-based business structure, have seen their shares hammered unfairly as investors flee oil stocks” wrote James Passeri of The Street.com on Tuesday. ‘These companies have been thrown out with the bath water,’ said Fadel Gheit, a leading oil analyst with Oppenheimer & Co., ‘It’s similar to a domino effect, in the sense that if your neighbor gets the flu, so will you. People are selling everything that has to do with energy.’ Part of the problem for midstream oil companies is that they’re included in many exchange-traded funds, or ETFs, Gheit said. When investors sell holdings in those funds, all the stocks suffer, regardless of whether falling oil prices crimp their revenue. The upside is that buyers stand to receive a considerably discount.”
Selling in the MLP space has been further exacerbated by closed end funds which have been forced to liquidate because they used leverage to juice their yield and returns. Leverage is a double edged sword which can hurt you in a down market like this. KYN–Kayne Anderson MLP Investment is down 32.6% from its November 2014 peak and still trades at a 14.9% premium to NAV.

A similarly hidden but powerful downward pressure is the unwinding of leveraged players who own attractive yield vehicles with historically low margin rates. As strategist Frank Longman explains “In our travels, we’ve been getting a lot of questions regarding ‘why defensive is underperforming’…. Even in 2013’s bullish rip higher, one of the better performing portfolio strategies was to take a basket of defensive names and lever it up to parity. Low, and just as importantly, stable rates made that possible and the VaR(Value at Risk) calculations enabled you to get really big with volatility persistently low. Now however, rising volatility is telling risk managers to tell their guys to gross down (volatility is the enemy of leverage) and that explains a lot of the relative weakness in defensive groups. So, the more crowded or specifically, levered up defensive names are underperforming versus what most would expect in a risk off environment.”

The following charts show the weakness in Kinder Morgan KMI began with the Federal Reserve’s April 27-28 meeting when the discussion of tightening short rates first began in earnest. The markets worsened in July with a decline in oil prices and worsened further in August with the China market crash and yuan devaluation.

The largest MLP ETF has lost over five years of gains. 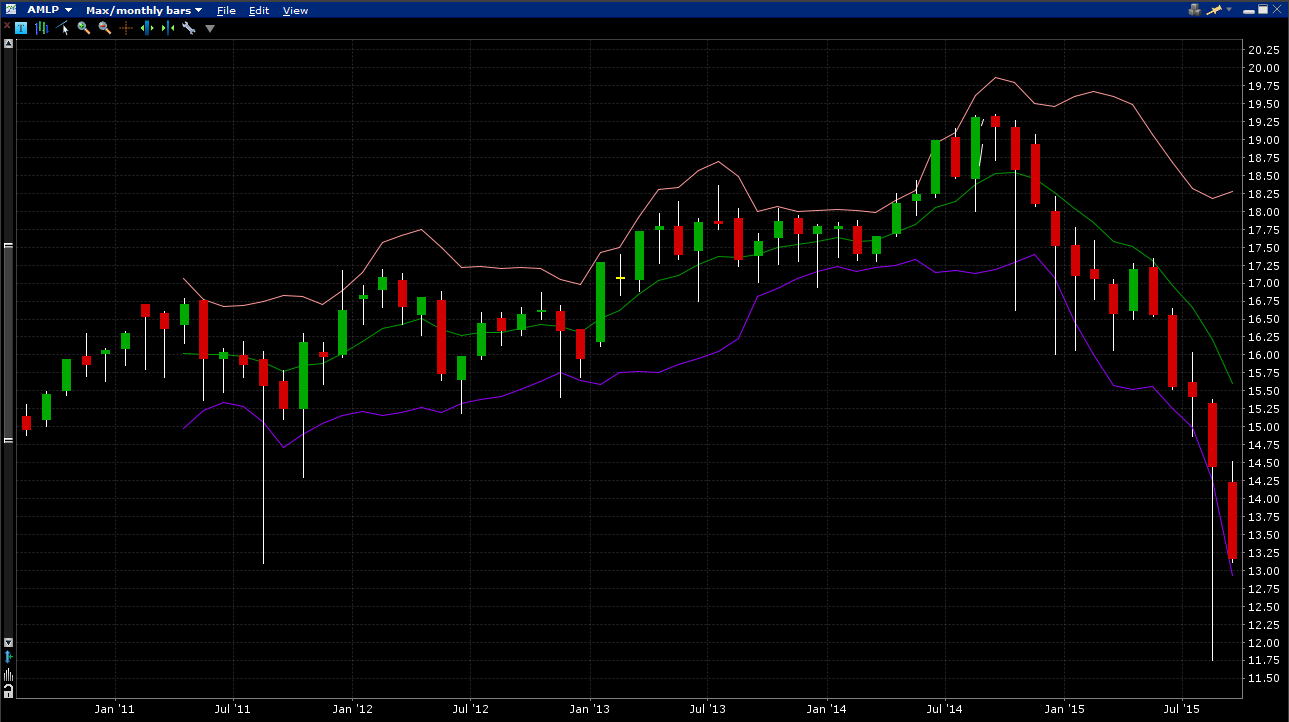 From August 31, 2010 until now the (AMLP) Alerian MLP ETF is down 8.28% versus the S&P 500 which is up 87.5%. We believe MLPs are at the end of a bear market. In contrast to MLPs, the US stock market is not cheap, just had a sharp break, and has had six years up. MLPs have seen a very significant correction and are quite attractively valued. The tactical asset allocation trade is to move from the S&P 500 and into midstream energy Master Limited Partnerships. MLPs are demonstratively misunderstood and an undervalued sector which is bottoming.

Caution: If the general market were to continue to decline, investors would be wise to recall that MLPs significantly outperformed the S&P 500 in the 2001-2003 bear market.

Consider this five year chart comparing the MLPs to the S&P 500. Where is the risk? 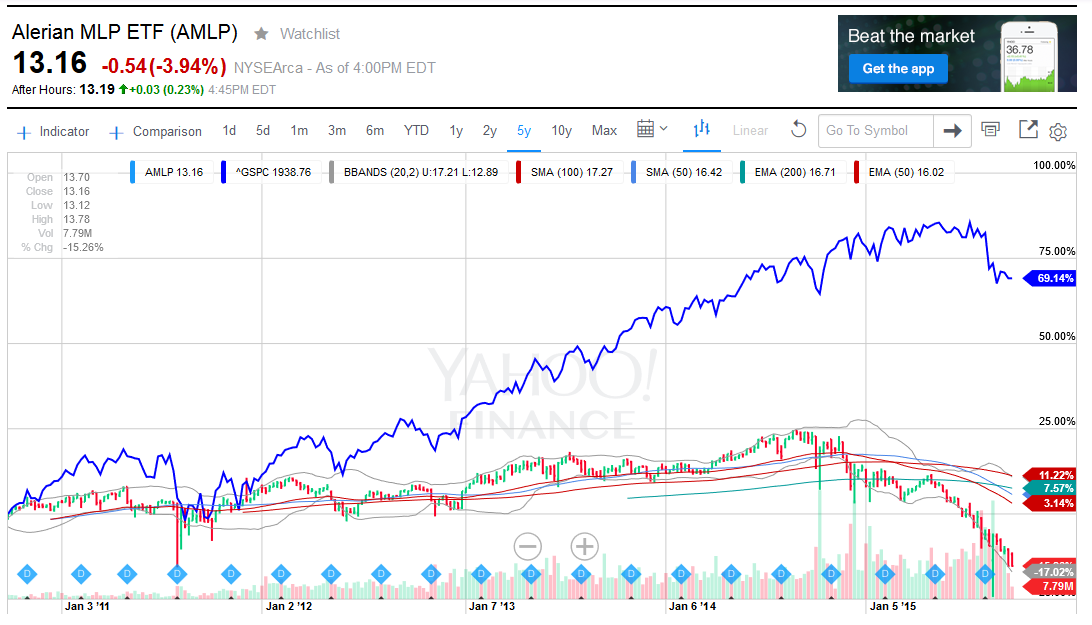 While ETFs and mutual funds that own MLPs are convenient, their returns are disappointing. Much of the return disappointment is the inefficient investment vehicle, not the MLPs themselves!

Consider that our separate account MLP performance has significantly outperformed 16.8% versus 5% for the AMLP ETF.

History has taught us that paying attention to major cycles can make a meaningful difference client investment performance. It is also important to note the significant performance difference between the MLP index (AMZX) and the MLP ETF (AMLP). Again, the 1940 structures of ETFs and mutual funds create heavy tax and administrative costs to the investor, which argue persuasively for separately managed accounts.

While it is impossible to call the absolute bottom in the MLP market, we believe the fears regarding China and interest rates are largely discounted and time will lead to higher oil and master limited partnerships prices.

In summary, now is the time to buy MLPs. We believe:
• the US will become a large exporter of oil and liquid natural gas in the future and this will help drive US energy infrastructure and MLP growth.
• the unique characteristic of MLPs is their ability to provide a solid growing tax advantaged income stream which is ideal for retirement.
• the recent volatility for MLPs is the exception for these steady franchises and solid income vehicles.