Several factors have coalesced to create an extraordinary buying opportunity in Master Limited Partnerships which should lead to returns in the 20% range between now and February. The unusual factors are:

The chart below reflects MLP Mutual Fund Outflows last seen during the oil and sector bottom in early 2016. Such selling, likely tax related, exacerbates the under-valuations associated with tax bounces where the selling is technically driven and normal economic market pricing factors are diminished. Forced liquidations by leveraged funds reinforce this mispricing and hence the opportunity.

The following chart shows the extreme in relative performance between value and growth stocks. It reflects the under-performance of value stocks, like energy, to growth stocks like Apple, Amazon, Facebook and Google. The value to growth relationship crosses an inflection point when it breaks the down trend and sets up for a sector rotation and performance reversion. 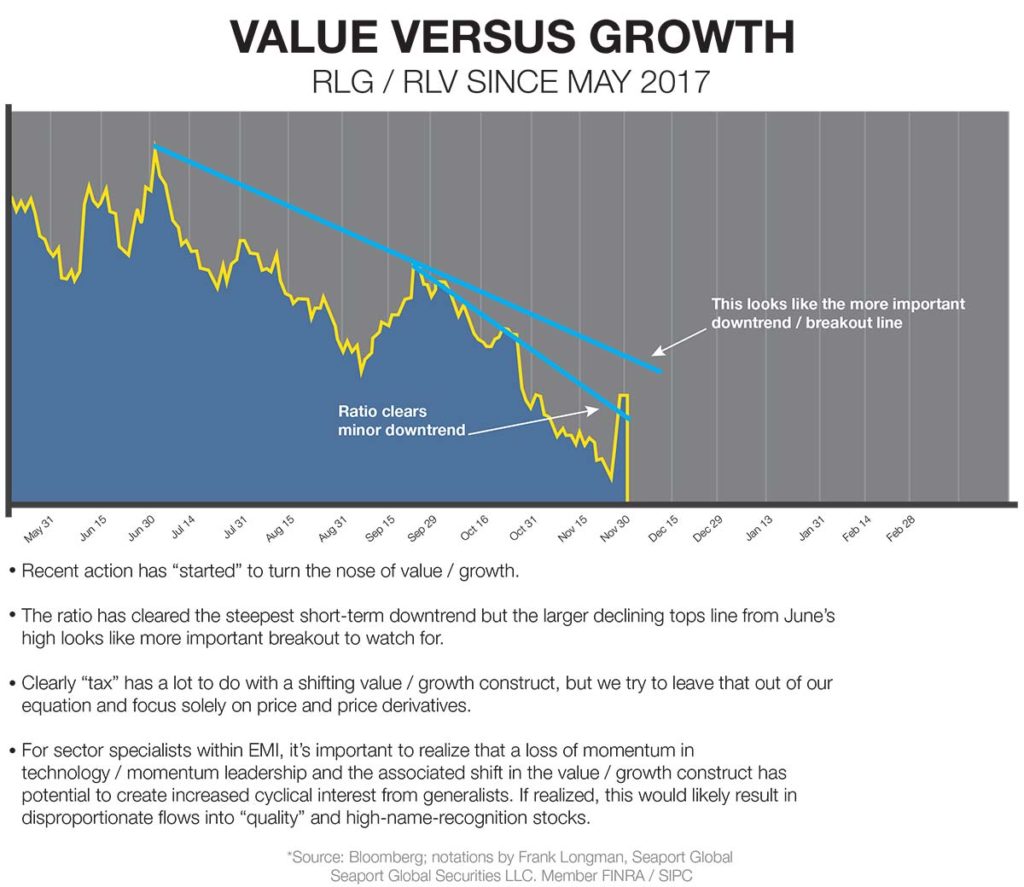 The fundamental reason to own midstream MLPs is their attractive, durable and growing tax advantaged distributions. MLPs are natural monopolies regulated by the Federal Energy Regulatory Commission “FERC”. Midstream MLPs generate revenues from tariffs based on pipeline and processing volumes and not from energy businesses per se which are tied to commodity prices. Consequently, MLPs had earned the reputation as income securities immune from commodity prices. However, the oil collapses in 2008 and 2015 dispelled this notion as MLP prices proved to be highly correlated to oil prices. The business reality is that MLPs price behavior is not closely tied to commodity prices, rather MLP prices are correlated with US production. When oil prices collapsed from 2014 to 2016, upstream oil production dropped off one million barrels per day as wells requiring higher prices ceased to be profitable. This led to a 10% decline in production which led to a 50% decline in the sector. As unprofitable capacity stopped producing, the US production growth rate from the fracking boom reversed and has been reset.

While the production trend remained positive throughout 2017 the weakness in energy and MLP prices relates to the right sizing of MLP balance sheets and operations. MLPs had used debt liberally and need to be profitable in the current lower price range of $40-70/bl WTI. This right sizing has been demonstrated through asset sales, distribution cuts and recalibrations in the last two quarters. With recent OPEC guidance, this fundamentally disappointing reporting is now abating and should improve in the coming months. When this happens, the positive feedback loop of MLP funds flows and prices will lead to a potentially dynamic rally over the coming months and quarters.

The chart below demonstrates the relative under-performance of MLPs versus other energy stocks (SPSIOP)-S&P Oil and Gas exploration, (XOI) NYSE Oil and Gas Index and the S&P 500. This suggests technical and tax factors driving unusual weakness in MLPs, particularly since the August 2017, which we believe will reverse in the New Year and drive this extraordinary buying opportunity. 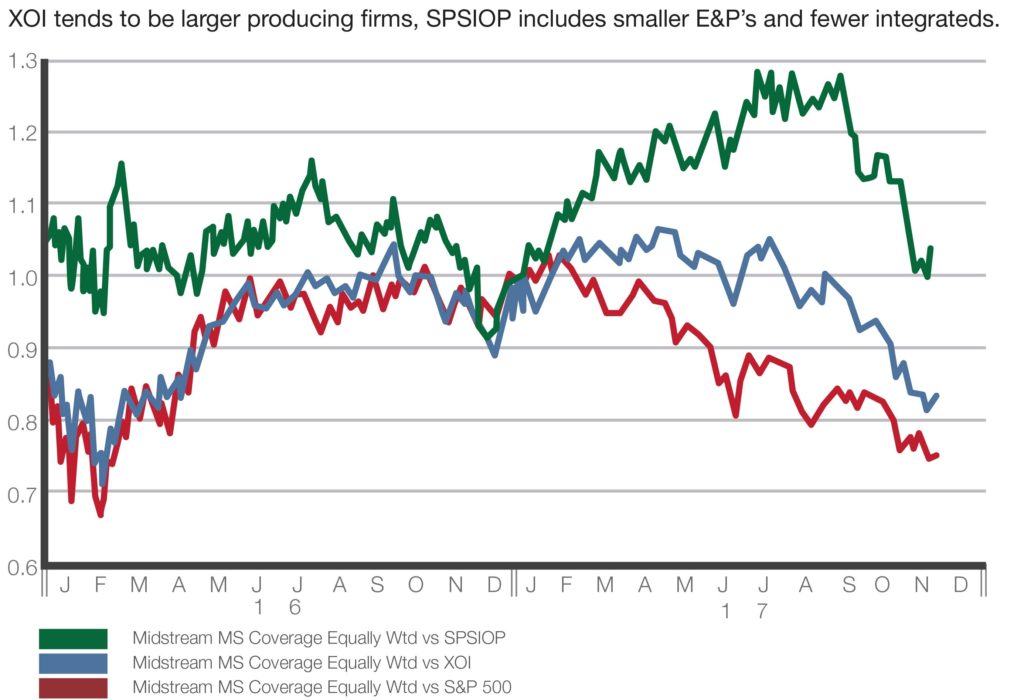 The difference between a speculator and an investor is the speculator knows the price of everything but the value of nothing. Our performance, while disappointing on a short-term basis, underscores value, which like MLPs during the February 2016 and December 2008 bottoms, preceded significant rebounds. Relative to the Alerian AMZX benchmark index we have consistently beaten this benchmark. (Readers may recall last year’s impressive returns were driven in part by JP Energy and American Midstream, both of which doubled, then merged and retraced, so our subsequently over-weighted position has weighed on this year’s performance.)

To provide a logical framework to help our investors better define their investment objectives within the MLP sector we developed our Bespoken MLP Portfolio Profiles. We have developed quantitative models to rank MLPs within each profile:

One recent observation we made was that MLP performance is inversely correlated to size. This is surprising as larger companies tend to enjoy economies of scale. However, this suggests that many of the businesses within larger MLPs are less profitable in the current low-price environment. If oil prices move toward $70/bl, sector wide earnings should drive a more robust and durable MLP recovery.

The stock market turned parabolic in 1998 and 1999. In 1999, the Nasdaq composite rose a stunning 85%. During 1998 and 1999 MLPs had negative returns. (See chart below.) Then, as the tech bubble burst, MLPs returned 45% in both 2000 and 2001. As current market enthusiasm builds, sober reflection on valuations and history suggest we are in the later stages of a major market rally and equity prices could come under serious pressure. Consequently, if you are not allocating to MLPs, it could be a mistake and a missed opportunity. MLPs offer a potential hedge against a weak market while producing tax advantaged yields in the 8% range from stable midstream energy companies.

If you have a large concentration in equities, it would be wise to consider using some hedging strategies and then investing in MLPs. For example, buying puts or using collars in combination with MLPs can generate non-correlated high income streams without creating a tax event and reducing your market risk from your concentrated position. During 2000 to 2003, many investors who did not address their stock concentration suffered significant financial stress.

Please let us know of any questions you have. The unusual market behavior, valuation extremes and year-end tax issues make this an especially sensible time to review your portfolio and ask what if?

We wish you the best this holiday season and a happy New Year.