The COVID-19 pandemic and its media coverage have driven the world’s markets since January 2020. The pandemic has been the primary fundamental factor driving the market’s ebbs and flows with stocks and bonds reacting accordingly. Since March 2021, the highly transmissible Delta Variant of COVID-19 has plagued India and threatens Europe, Africa and other geographies. Consequently, the Delta Variant has blunted the US and international economic recovery and has slowed the rapid rise in interest rates. The 30-year US Treasury yield, which bottomed at 1% in March of 2020, peaked at 2.45% in March 2021 before this Delta Variant pause began. Since bonds correlate with long-duration assets like technology, income and growth stocks, these assets firmed in the second quarter while commodity and economically cyclical equities softened.

The COVID-19 Delta Variant tapped the breaks on the accelerating global recovery in the second quarter and its global spread is shown below.

The chart of the 10-year US Treasury yield shows a retracement in yields during the second quarter, a phenomenon Income Growth Advisors, LLC “IGA” believes will be transitory.

A similar scenario is shown in 2017 in the chart below by OPCO’s Ari Wald. The US economy still has 9.5 million unemployed and COVID-19 travel-related restrictions to overcome before the economy returns to full strength. By year-end or 2022, we expect a full recovery and 10-year Treasury yields could easily exceed 3.0% which would then compete with the S&P 500. 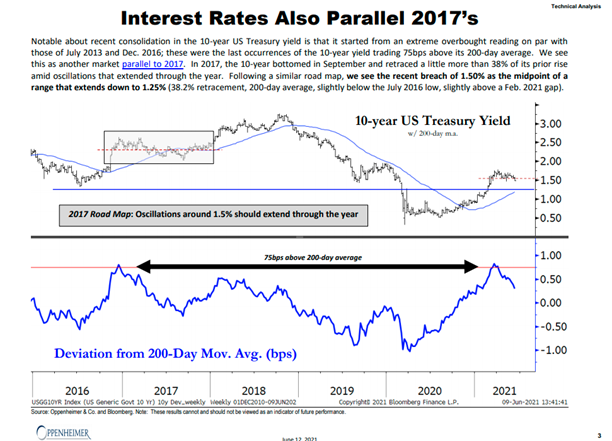 DoubleLine CEO Jeffrey Gundlach said in 2018 that “commodities are very, very cheap. Commodities have long cycles, as well. A fascinating chart [shown below] has been circulating in the investment industry. It compares the total return of the Standard & Poor’s 500 index to the total return of the Goldman Sachs Commodity Index, and it goes in tremendous cycles. In the 1970s, commodities started to outperform. They outperformed the S&P 500 by 800%, and then gave it all back. Then there was another wave up, and commodities outperformed again by 800%, actually 900%, and that continued into 2008.” We believe this commodity rotation has begun in Save earnest and we are investing in energy and commodities to capture this important new cycle. With the cyclical economic recovery, interest rate-sensitive stocks and bonds will underperform commodities and economic cyclicals stocks. This deflationary to inflationary cycle transition is shown below in the charts by DoubleLine and Income Growth Advisors, LLC. 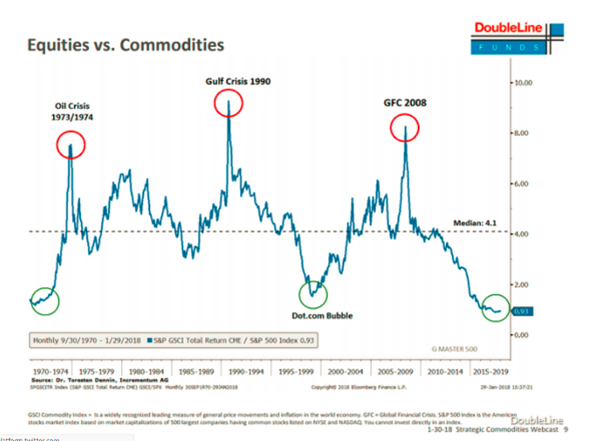 Inflation – The Fly in the Ointment:

Since 2008, inflation has disappeared from the economic conversation, despite massive government financial stimulus. However, with global trade and technology-driven efficiencies providing years of deflationary pressure, investors and the Federal Reserve appear to give little credence to the prospect of a resurgence in inflation. We believe supply chain disruptions growing out of an over-reliance on China combined with today’s notable supply shortages are flipping the script. Economist Ed Yardeni’s charts below show an unmistakable uptick in commodity prices as reflected in the CRB Commodity Research Bureau Index. While dissimilar to the vicious oil price rise driven inflation of the 1970s, today’s shortages, spiking commodity prices and unprecedented liquidity should push inflation well above the “transitory levels” the Federal Reserve is wishfully promoting. Given that the economy has still further to grow, this recent spike in commodity prices is likely to rise further and persist longer leading to higher yields. On June 16th, The Federal Reserve’s so-called dot plot, which the U.S. central bank uses to signal its outlook for the path of interest rates, shifted toward two rate increases by the end of 2023, and prompted a short market selloff. This small change suggests that the Fed’s transitory inflation scenario is not following their models. Further equity market downside is likely as the Fed reverses its unprecedented accommodation. Our Great Rotation strategy is designed to protect investors in the years ahead. 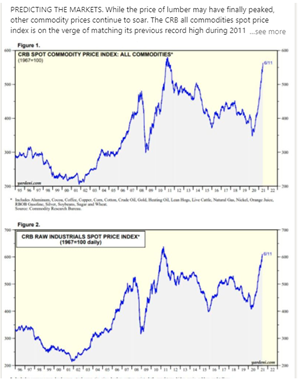 The Yardeni charts to the left show a rapid rise in inflation not seen since the 2001-2010 period when a commodity cycle last occurred. Our CRB ETF above shows commodities rising to new highs. With recent higher and hotter CPI and PPI inflation reports, an increasingly risky economic and market environment could unfold in the coming months and quarters.

As interest rates rise, the risk premium for owning stocks over bonds will decline to zero, making the historically expensive stock market extremely unattractive. The Fed Model or Risk Premium Model we use to assess market valuations suggests that rates can move up 2% to 3% from here before the equity market is seriously at risk. However, the rapidly rising red S&P 500 earnings line [in the middle panel] reflecting the rapid economic recovery since April 2020, has begun to moderate. 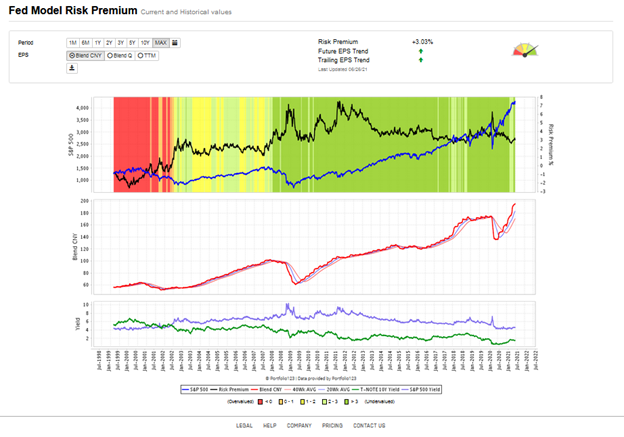 The Shiller CAPE ratio chart below shows that S&P valuations exceed that before the 1929 crash but below the 2000 technology bubble. The only factor supporting today’s equity valuations are the historically low-interest rates, which are artificially depressed by Federal Reserve purchases of bonds and mortgages, and other accommodations which have been introduced following the 2008 financial crisis and the COVID-19 financial and economic crash. There is asymmetric risk to the downside if interest rates rise too quickly. With inflation and poor public policy, we could experience an upward spiral in interest rates and that could cause the next global recession. 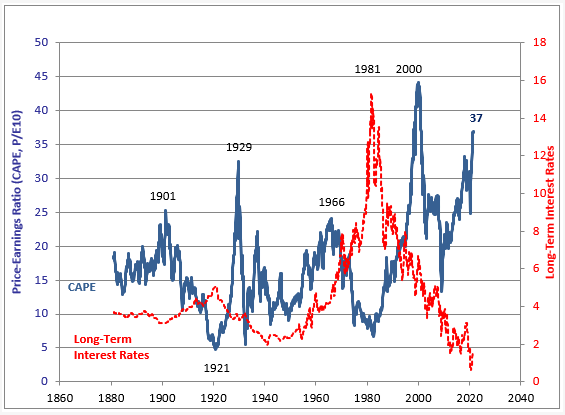 IGA believes that energy is an important cyclical area to invest in to participate in the Great Rotation. Last year’s COVID-19 market crash produced a “rare investment opportunity” that IGA chronicled with an unusual emphasis in March through May: Coronavirus and OPEC Black Swans Create Rare 1987-Like Opportunity in MLPs, Irrational Pessimism: The Market is Bottoming, A Rare Opportunity for Income and Growth, A Rare and Historic Opportunity in MLPs, and The Coronavirus OPEC+ Double Black Swan. In the wake of the COVID-19 market collapse, the OPEC revolt and the forced liquidation of closed-end MLP funds, IGA wrote the five letters above highlighting the exceptional opportunity to invest in two Kayne Anderson closed-end MLP funds and the MLP sector. The logic was clear. These closed-end funds KYN and KMF were trading at significant discounts to their liquidation value, had their dividend yields rise up to ten standard deviations above average while owning defensible energy infrastructure hard assets with stable cash flows.

The chart below shows both KYN and KMF appreciating 149% and 142% since April 1 2020. Our enthusiasm was particularly motivated by their extraordinary yields. On March 31, 2020 KYN and KMF yielded 39.7% and 27.03%, though we knew they might have to cut their distributions due to margin call induced forced liquidations generated by the CEF’s “prudent” use of leverage during this triple black swan market. We concluded that due to their discounts to their net asset value “NAV”, high cash-flow stability, natural monopoly energy infrastructure assets, these MLP CEFs and the MLP sector offered truly rare and historic bargains.

Both KYN and KMF still offer attractive yields in this unusually low-interest rate environment.  Today, KYN and KMF’s yields are 6.74% and 4.77% and have 5.83% and 16.2% discounts to NAV, respectively. Below are two data sets showing KYN and KMF’s yield, NAV and price on April 1, 2020 and on Friday’s close.

The chart below of KYN and KMF show their extreme selloff from COVID-19, the OPEC+ dispute and the MLP Closed-End Fund forced liquidation black swan.

While the appeal of MLP closed-end funds remain, their broader fossil fuel exposure and leverage make them less appealing than some pure-play natural gas investments like Antero Midstream (AM), Antero Resources (AR), and Tellurian (TELL) which offer unique growth and value propositions.

The Case for Natural Gas:

While activists promote renewables like hydroelectric dams, wind turbines and solar panels, these alternatives provide a fraction of the energy generation needed to heat our homes and keep the electricity on. By substituting natural gas with coal plants, the United States has lowered its carbon footprint more effectively than many other economic powers. During the coming decades-long transition to broader use of renewables, we expect natural gas will continue to grow as “the clean fossil fuel”, while sllowly displacing coal and oil.

“Coal plants supply less than 20 percent of the country’s electricity, down from about half a decade ago. Over that same time, the share from natural gas has doubled to about 40 percent. Renewable energy has also more than doubled to about 20 percent, and nuclear plants have been relatively steady at around 20 percent.”

IGA has been very fortunate with natural gas stocks over the last 15 months, specifically Antero Resources (AR), Antero Midstream (AM), and Tellurian (TELL). AR and AM were highly leveraged, but their continued stock and bond purchases, premiere basin exposure, and sharp investment banker management team kept us buying. Tellurian will provide a long-term global “LNG” business directed by CEO Sharif Souki who revolutionized LNG shipping as Co-founder and former CEO of Cheniere Energy. With the secular bull market in natural gas, these three natural gas stocks still have compelling potential.

Last year’s collapse in oil prices – oil prices turned negative last May in the futures market – led to a collapse in oil drilling. When oil wells shut down, they not only stop producing oil but also the associated natural gas that comes from the same well. Consequently, when the market crashed last year, supply fell off for natural gas, but the demand for it did not. Consequently, demand continued rising with less supply resulting in the 11-year bear market in natural gas prices ending.

The economy will continue to grow and with the Delta Variant fading, interest rates should resume their march higher. The degree to which interest rates rise will depend on how meaningfully inflation rises. With the current combination of excessive monetary and fiscal stimulus, combined with supply shortages, and millions to re-enter the workforce, interest rates could rise another 2-3% or more.

Among the skills I have acquired throughout my investment career, understanding market cycles and major market cycles has proven critical. Those who had invested outside of technology following the 2000 tech bubble, made attractive returns while those who didn’t pay dearly. Those who did not recognize the ESG movement and fade fossil fuels and own big-cap tech over the last eight years significantly underperformed. We now believe that the markets again are at an important turning point.

To hedge against higher interest rates we are buying commodities and cyclical stocks for our clients. Natural gas, MLPs, precious metal stocks, commodity stocks with copper, steel and lithium exposure should outperform while large-cap technology stocks like Microsoft and the FAANG stocks should underperform. Other asset classes including European equities and emerging market equities will provide outperformance relative to the S&P 500 over the coming decade.